New Addition to Rock and Rose

So I received a text on Christmas Eve from Orli saying her obstetrician had bet her £1 she would be in labour by Christmas day.  I was just finishing a very big plate of Christmas dinner when my phone buzzed and I realised it was Orli’s mum letting me know it would be “tonight or tomorrow” I suddenly felt a rush of panic. I have no idea why, maybe partly because we’d talked for so long about the actual birth and here it was actually happening. I dreamed of Orli all night Christmas night, I dreamt we were at a wedding and her waters broke and I had to get her to the hospital. I think part of me also suddenly thought this will be me in 4 months time.

At around 11am boxing day morning my phone buzzed again and there she was, beaming up at me,  such a beautiful baby, absolutely perfect, masses of brown hair and her name, Annabelle Grace born on Boxing day at 00.26 am weighing 7lbs 0.7oz. Orli was doing well and her and Rob were absolutely over the moon. Now I did realise that despite arriving bang on her due date, we had planned for a bit of a rest over Christmas (at least I was) and Annabelles prompt arrival meant that I would be back in the studio sooner than I had planned! (Annabelle if you are reading this in a few years time- I of course forgive you and pretty much couldn’t wait for a cuddle anyway plus this didn’t really feel like ‘work’ to me) 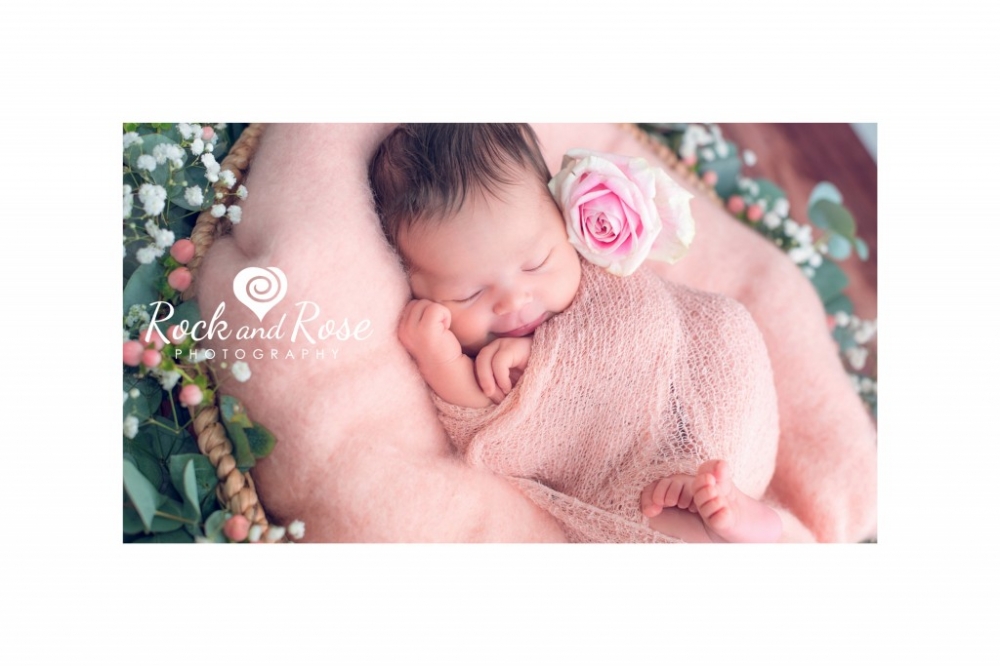 She doesn’t stop smiling by the way- a very contented baby! I must admit Annabelle has been the first newborn I felt nervous about photographing. After all Orli knows what she likes and i’m not gonna lie I felt the pressure! I managed to shoot the first few shots and a few in-between but Orli couldn’t resist shooting some images herself. So for a lot of our session I took on the role of spotter, shusher and positioner. Orli took a few shots of me positioning and gently shushing Annabelle to sleep which you can see below.

So during any of our full newborn sessions there is always time for a chat! (In between feeds and Nappy changes) I had to ask Orli about her experience. So I gather she spent all of Christmas day in Labour and all she could manage was half an Orange Kit Kat. Apparently her mum bought in a Roast for Rob and she tells me he ate it in front of her. (He even complained there were no pigs in blankets as he’d been given figs in blankets- though in the end he thought they were nice) As you can imagine I don’t think Orli was too amused. She tells me at least she wasn’t in too much pain at that point (lucky you Rob) but it didn’t last long. I asked her to sum up the whole thing for me and she said this:

“Annabelle is so special, I feel like i’m the only person who’s had such a miracle happen,

really weird when it’s the most natural thing in the World, but to me she’s a miracle.

The love you feel straight away is phenomenal.

Rob is besotted and at first he just sat there watching her in her crib like all of us.

Of course, she came out as the perfect model for her Rock and Rose Mums, well mum and Aunty.

It has been such a joy to take Annabelles first photographs and to have her here in the studio. When Orli first walked in and I saw her tiny and bundled up in her car seat I cried like a child. I feel like I journeyed Orli’s pregnancy with her, from all the things I am going through now to seeing her baby in real life is just beyond incredible. And how did time fly!!!  I will share a few more images from the session before we do a full sneak peek. We are just getting ready to photograph our second newborn session of 2016 as Mike and Kristy who’s wedding we photographed have just had a beautiful baby girl. If you would like to know more about our newborn sessions please do just call me in the studio as I can talk you through everything. It’s a magical experience and so amazing to capture your baby so tiny. It’s best to call me during your pregnancy as then we have plenty of time to plan your session and make it totally bespoke to you.

“Before you were born I carried you under my heart.

From the moment you arrived in this world until the moment I leave it,

I will always carry you in my heart.”